Today we are announcing that after years of helping developers automate their development workflow we will be shutting down Rocro SaaS on January 31, 2020 JST, and ending new subscriptions and renewal of paid plans on December 23, 2019 JST.  Since Rocro is a monthly subscription, there will be no paid plan users at the end of January 2020.  We delete all the user data, including email addresses, GitHub/Bitbucket account information, and any output made by Rocro services. Also please note that Rocro has never held your source code information; we download source code only for code review and delete it after every analysis.

We are proud that we have been able to help so many of you build great software.  We enjoyed working with each of you, and we have deep admiration for the things you have built.  Thank you for using Rocro.

Now, I am pleased to announce that Rocro Inc. is being acquired by Sony Network Communications Inc.(SNC) effective as of August 1st, 2019.
This organizational integration of Rocro into SNC will enable Rocro to be better positioned for future product development and customer support, and it will not affect the current Rocro services or support.
You can continue to use Rocro services with confidence.

Please contact support@rocro.com for further questions.
We look forward to serving you better as a result of the integration.

Rocro Inc., which provides SaaS tools for software developers, is proud to announce the launch of the public beta version of Loadroid, its cloud automated load testing service.

With Loadroid, developers describe their load testing scenarios in YAML. Then, Loadroid automatically sets up the test environment on the cloud, executes load tests according to the scenario, aggregates the results, and displays it in an actionable and easy-to-read graph.

As a result, the time required to perform load testing is dramatically reduced. In our tests, a task that took two weeks with JMeter was done in four hours.
Loadroid also operates completely under software control, so the users can easily incorporate it into their CI. This way, developers can make sure their load tests are automatically run at specified events. Usually, developers seek software quality in such terms as the number of bugs, complexity, and similar varieties of metrics. However, the quality of the final product is equally determined by how many people can access the application. With Loadroid, you can pursue higher product performance right from the development phase. Loadroid was built to achieve high scalability, and can be easily set-up to run tests that simulate millions of IoT devices.

Our CLI tool is free of charge, so you can get started with Loadroid today!

Here are a few testimonials from our closed test customers:

We provide API services that expect a large number of requests and we started using Loadroid to perform load testing. With other tools, it would be very expensive and time consuming to build an environment where you could have 10,000 requests per second. Happily, with Loadroid, all we have to do is to write a simple YAML and the tests take just a few minutes. The result graph is drawn in real time, and its history is also committed to Git. This way, we can easily manage even the most complex test cases. Because JavaScript is available, it can handle dynamic requests, which is very useful.

We moved commercial services from on-premises to AWS’s cloud environment. At that time, we used Loadroid to conduct load testing against the AWS environment. Although there were about 5 sites to be migrated, the load testing was performed for each site simply by writing a YAML file and switching the branch. As a result, the performance testing took a very short amount of time.

Loadroid is available free of charge during the beta period from this link. If you plan a very large-scale load testing scenarios that is beyond the scope of the beta version, please contact us.

Rocro, one of the latest companies to come out from Sony, has its roots in Sony ‘s software development group. The company was established as a solely owned subsidiary of Sony Network Communications, and it aims to make publicly available the solutions initially developed for Sony’s internal cloud infrastructure.

The public beta versions of Inspecode and Docstand and the closed beta version of Loadroid were first made available on September 14th, 2017. Since then, Rocro managed to acquire more than 1700 users from all over the world, from Japan to the United States and India.

To make sure software developers get the most out of our products, we decided to employ a per core pricing structure. Rocro’s monthly subscription starts at $50 US dollars per core. For more details, please have a look below: 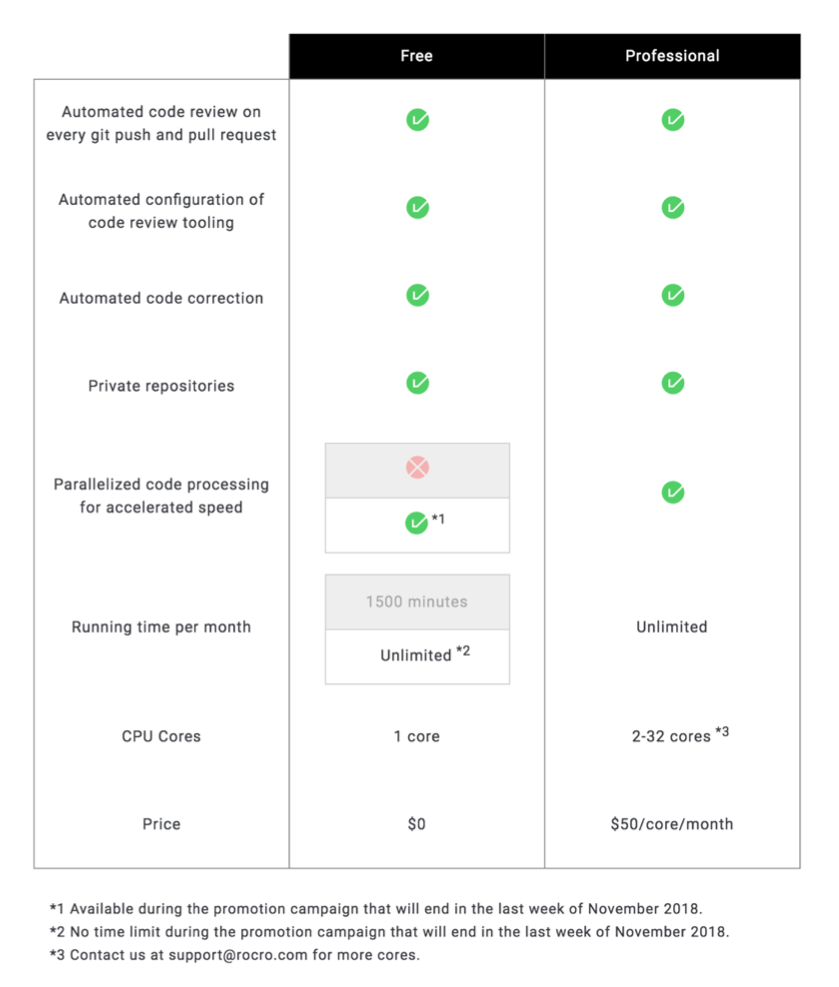 We believe that a per core pricing structure is more efficient than a per seat one. With our pricing structure, regardless of the number of users, the monthly price you’ll have to pay will depend only on the maximum number of CPU cores your development team will use for Inspecode / Docstand.

For example, if opting for two cores, it will cost $100 per month for the entire team. Conversely, if opting for 4 cores, it will cost $200 USD per month. This model is very simple and predictable, and, at the same time, it enables you to choose the optimal solution for your team. The costs will not change, even if more developers join the team.
Inspecode and Docstand are engineered to provide breathtaking levels of speedup by executing the processing tasks in parallel. Combined with our fee structure described above, this allows our customers to control the amount of processing power available for each team of developers, and, most importantly, save money. For more details, please refer to our blog post on how to optimize resource allocation.

We are happy to announce that, to celebrate the official launch, all our customers will enjoy unlimited execution time with “Free plan” until the end of November 2018.

Rocro Inc., a 100% owned subsidiary of Sony Network Communications, was established to help software developers around the world focus on the essentials. The company provides an array of services that increase the level of automation for day to day activities, simplify development tasks, and parallelize them.